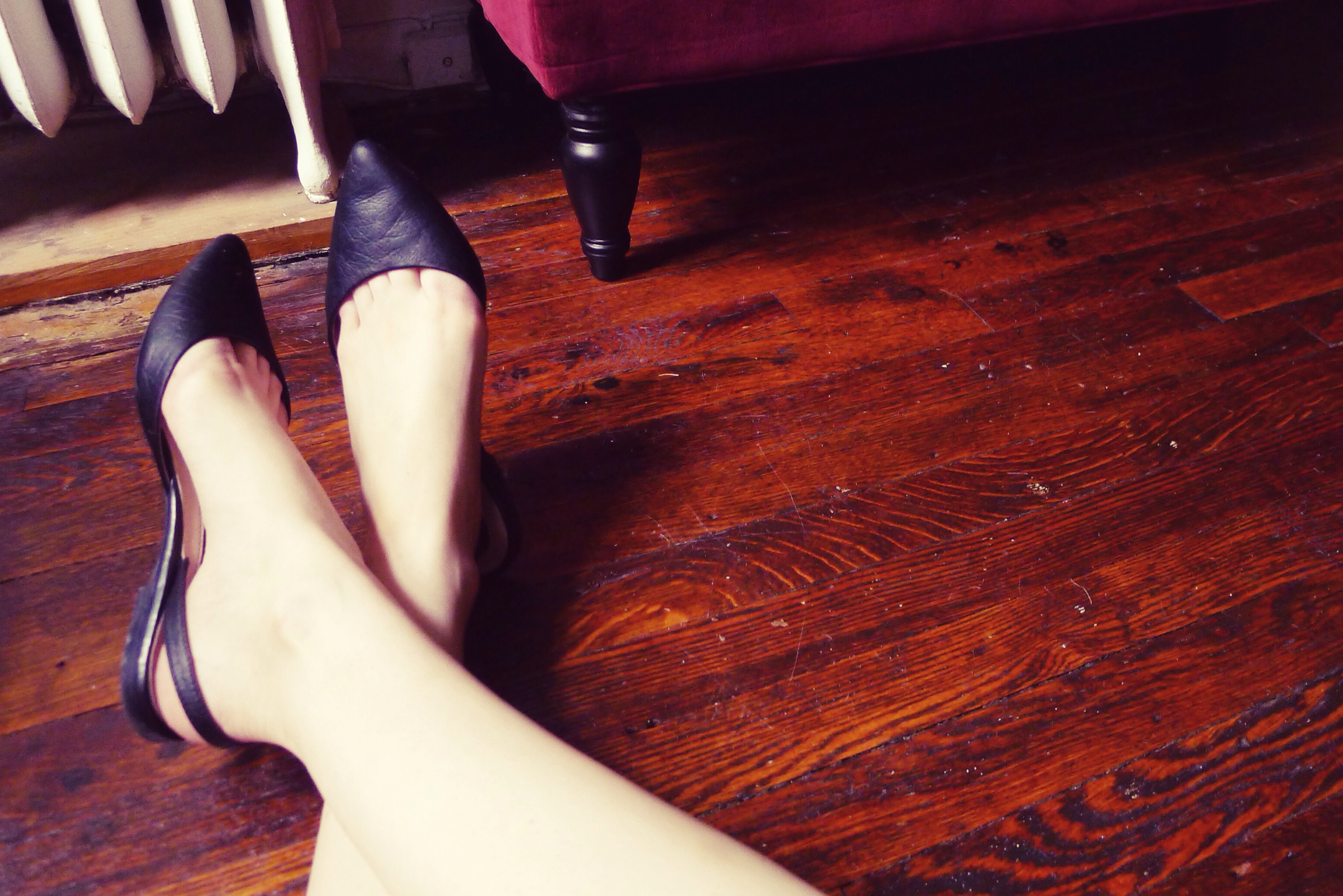 The Worst Rain Shoes in the World, I’ve discovered, are a pair of flat black pointed-toe leather slingbacks, purchased for $40 from Zara so that I might have some cheap (yet stylish) commuter flats for casually beating around the city.

It is with a glimmer of trepidation that I put them on in the morning, as rain is in the forecast and I am unsure of how they might fare in a downpour.  But they’re comfortable, elegant, and look rather good with my outfit, and so I squelch that particular upwelling of doubt and wear them into the world regardless.

Around 2:30 in the afternoon I’m walking up 5th Avenue, enjoying the scent of air-conditioned retail and incense from St. Patrick’s.  A grey haze hangs over the city, and a few fat raindrops are beginning to fall; I think briefly about ducking into Saks in the event it starts coming down with any enthusiasm, but that’s a potentially expensive wormhole to uncap and so I squelch that instinct, too.

How stupid of me, I soon realize:

By the time I reach 55th St., it’s really pissing down.  I’ve remembered to bring an umbrella, but my feet are so wet that the slingback straps slither down the backs of my heels and the shoes slip off with every step.  I hobble along, stubbornly; all the cabs are full and I want only to make it to the train, and avoid the lonely, boring, mobile-phone-draining fate of cowering in a vestibule for the rest of the afternoon.

Five minutes later I’m standing in Louis Vuitton, and everyone is staring at me because I’m hopping about like a wet cat trying to dry my feet instead of buying anything.  The thought occurs that I could simply purchase new shoes, but for the cost of a pair of LV galoshes (or some equivalent from Bergdorf’s, inconveniently located a million-billion slippery footsteps across the avenue) I could purchase a round-trip plane ticket to somewhere nice.  Like Iceland, where I could climb elf hills under the aurora and swim in the Blue Lagoon.

The rain continues.  There is nothing to be done for it all besides scream into the Aether (and I need something to do with my hands, besides), so I pull out my pocket computer and post about my predicament on Facebook.  A friend suggests that I might dispense with the shoes, and I shudder in agreement; my feet are already soaked with the slime of the Metropolis, and anything untoward that might trickle into my pores as a result is already well on its way to doing so.

I peer out through the double glass doors and into the monsoon, where tourists pitter-patter up and down the sidewalk in flip-flops and ballet flats.  How heartily they cling to the illusion that those thin strips of leather and foam protect them from invisible horrors, pitter-patter-pitter-pattering in blissful ignorance, and all the while the filth continues to ooze in of its own accord.  Seeping between their toes.

A contaminant.  A stain.  A slowly bleeding sorrow.

But even worse than actual filth is the blight on perception, that smudgy spot at the corner of the eye of the soul that fools them into believing it’s a good idea to take flight by modern miracle to New York, that Holy City, the New Byzantium that stands at the mouth of the Great River, and do nothing more with that supreme privilege besides gawk at WICKED billboards and buy bad jeans at Abercrombie.

Veils of Illusion be damned.  I whip off my flats and head into the deluge; an old Italian guy gives me a slowly-winding side-eye when he sees my bare feet, and I counter with a glare as I descend into the 5th Avenue/59th St. NQR train like Ishtar to the goddamned Underworld.

Two steps down I stop.  A cascade of rain pours into the subway hole and pools on the platform below, where a doe-eyed 5-year-old girl stands ankle-deep, clinging to her mother’s hand.  And a grim vision glows up at me from beneath the water:

After all, not a hell of a lot of time has passed since it Actually Happened, and who are we to think that it might never Happen Again.  There before me is a shade from two Novembers ago:

A ghostly, will-o-the-wisp rendition of the city, drowned.

I slip on my shoes and form crescent horns with my index and pinkie fingers behind my back, an old superstitious (and admittedly OCD) gesture I sometimes do with the intention to ward off bad juju.  And I forgive my delusional brethren out on the avenue, for it’s a fine fucking line between delusion and hope.

Though I do very much hope it is within our power and wherewithal to properly brace ourselves against once and future catastrophe.

Gothamist advises a rainy week; Hurricane Evac Zone Maps hang on display in every train, unheard of in the days of yore.  In both short and long term, it appears the time is nigh to prepare:

Campaign to build floodgates and pumping stations around the island. Purchase a solar-powered charging strip.  Buy more high-water boots.  (Rag & Bone makes some nice ones, perfect for shorter ladies with skinny calves like myself; I for one will be sticking to wellies the rest of the week.)

I wind my way down to the platform, and the specter fades, leaving only one word:

A good rain washes away everything, after all.

I pop in my earbuds, and stand clear of the closing doors. 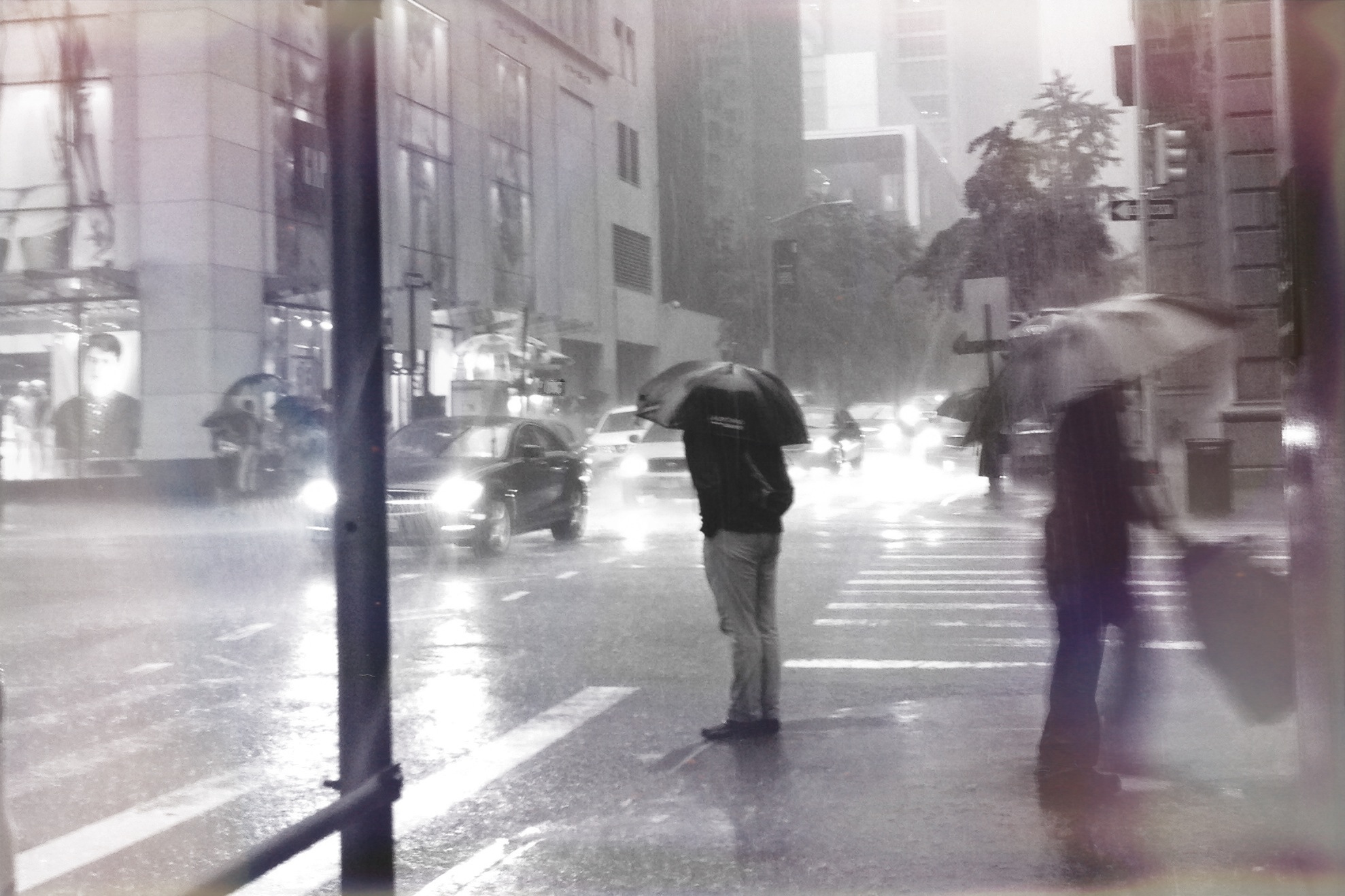 This entry was posted in Essay, Lifestyle and tagged New York, Shoes. Bookmark the permalink.