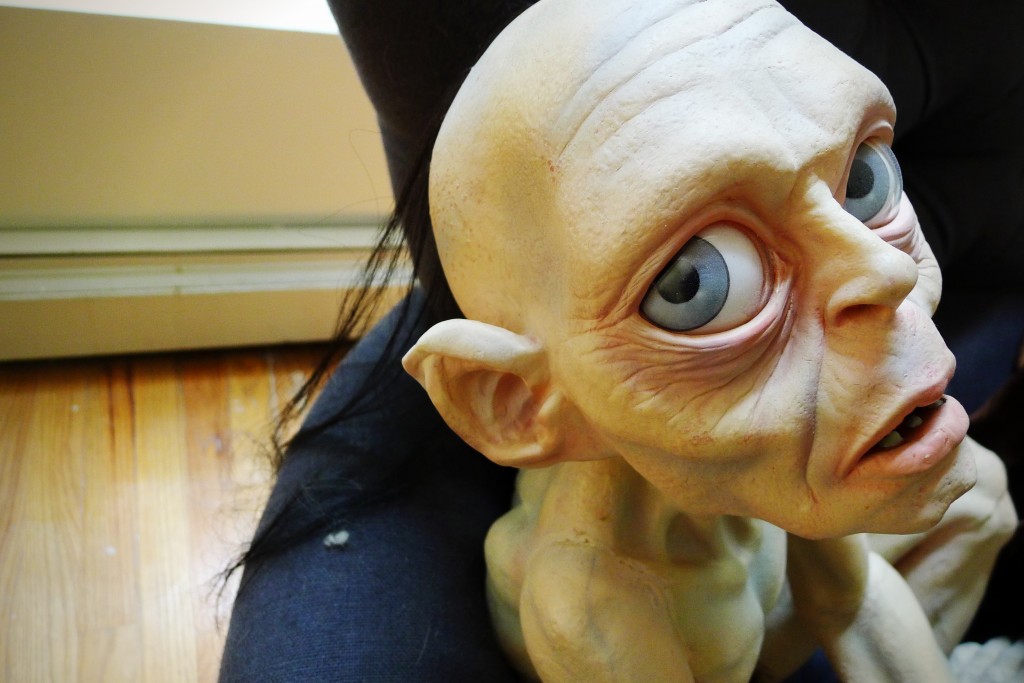 June is reaching its conclusion, friends.  School is out, the Dog Star shines bright in the sky, and the New York air is filled with that special summertime scent of exhaust and warm garbage.  Lord, how I’ve missed the city this time of year!  It’s picturesque, to be sure; even so, it would all be much more enjoyable if I wasn’t faced with the task of moving out of my Brooklyn sublet in time for the holiday weekend.

On a pragmatic level, the impending move means my current roommate is in the midst of hauling all of her stuff out of the apartment.  This includes a pile of furniture primed and ready for Goodwill, a small storm system of cat hair, and this life-sized Gollum sculpture – which previously stood beneath the desk in her home office, peering creepily out at anyone who had to pass through the room in order to get to the downstairs back garden.

When it made an appearance atop what was presumably a donation pile, I couldn’t help but make note.  Eyeing it with interest one afternoon, I wondered aloud to my boyfriend,

“NO.  You don’t want that,” was the prompt response.  “Leave it right there.  That would be the source of many uncomfortable…late-night surprises.”

I followed him out of the room, gazing wistfully at it over my shoulder, unable to totally shake the fantasy that a life-sized Gollum sculpture might be a cool thing to have.  Very cool indeed, Precious.  Yep: I’d probably put it in my office, too, right next to the Elvish dictionaries and my autographed poster featuring every single cast member of Lord of the Rings (even Hugo Weaving)…

But NOOO, Precious!  It’s a trap!  Beautiful and terrible as the dawn, treacherous as the sea, strong as the foundations of the earth!

SIGH.  My fella was right, I had to admit: the thought of engaging in any kind of sexual enterprise with it sitting there looking at me was just too much.  All shall fuck me and despair.

(Yikes.  And it wasn’t even time for elevensies yet.)

Really, the thought on the whole lends some credence to the idea that there are times when it really is best to avoid accumulating too many random possessions, tempting though they may be in their appeal.  (Can you imagine carting that thing around from sublet to sublet in a cab?  Eeech.)  East of the Sun and West of the Moon is one thing, but hell: I’m already daunted by another move, and I’m only going to Astoria.

Besides: why bother burdening yourself with the flotsam and jetsam of someone else’s life?  It isn’t worth the effort.  Rather, stay bright and travel light, friends; ready or not, the road goes ever on.

This entry was posted in Essay, Photo and tagged Geek, Home, Summer. Bookmark the permalink.